The Venetians walls and fortifications that surround the historical old city of Famagusta are a superlative example of Renaissance military architecture.  They were built between 1495-1564, incorporating the existing medieval Lusignan walls and towers, which were dramatically reduced in height, remodeled and strengthened.  The great bastion of the Land Gate, also known as Limassol Gate, was one of two original entrances to city (the other, the Sea Gate to the northeast, offers access from the port).  It is protected by the impressive ravelin, inside which is a labyrinth of ramps, steps and rooms.  The Land Gate was renamed Akkule or 'White Bastion' by the Ottomans, as it was from here that the Venetians waved the white flag of surrender at the end of the siege of 1570-1571.

It is said that in 1571, after weeks of battling and tunneling under the walls, the Ottomans finally managed to gain access to the ravelin.  The Venetians, determined to withstand the advance, blew up their own secret passage under the walls, burying a thousand Ottoman soldiers in the rubble, as well as 100 of their own men. 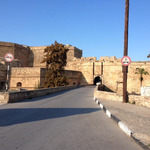 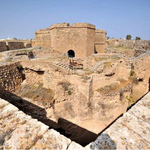 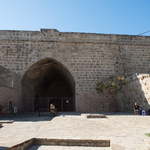 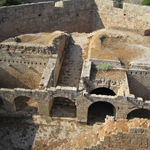 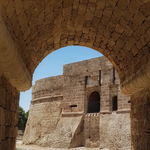 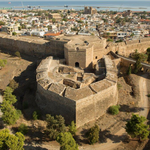 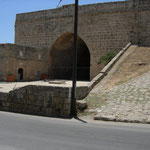 The Ravelin / Land Gate is an essential part of the walls of Famagusta and the main entry point for those arriving to the city from other parts of the island of Cyprus. It is a complex massive structure built into the living rock with many layers of history from the original Lusignan original tower to the Venetian Ravelin to the later changes by the Ottomans and finally British conservation efforts. It is formed by various levels of construction, connected by small passageways, bridges and fosses and connected to the outside of the city by a bridge and drawbridge. Because of its importance and prominence as the main entry into Famagusta it receives many visitors. A conservation project started in February 2017 is now completed.