Othello Tower / Citadel, Famagusta. The Othello Tower/Citadel is an important monument in the history of Famagusta, Cyprus and the Mediterranean. Its importance and a sense of age and mystery are evident when one walks through the portals of the citadel — with the Lion of Venice still presiding after hundreds of years. The citadel consists of wall fortifications, connecting walls and four remaining towers (originally eight). These elements are in various states of decay from ruin to complete walls and rib vaulting. The monument comprises of two structures one inside the other. The outer Venetian fortifications that date from 1492 were constructed around the earlier Lusignan fortification from the 14th century. The Othello Tower / Citadel formed the key defensive position for the city of Famagusta at the apex of the city walls and the protector between the port and the sea. Othello Tower was the first project of the Technical Committee on Cultural Heritage to be implemented in Famagusta. Completed in July 2015, the Othello Tower/Citadel is now open to visitors. 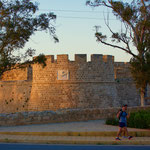 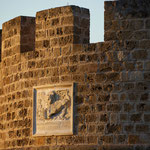 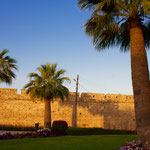 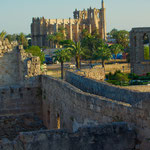 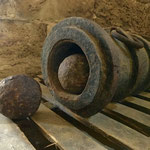 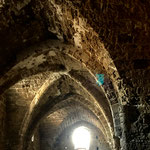 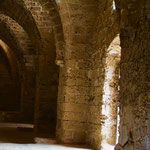 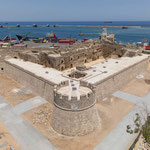 Famagusta’s medieval castle or Citadel occupies a strategic position overlooking the harbour. Built first by the Lusignans during the reign of Henry II (1285-1324), it was later enlarged, altered and greatly reinforced by the Venetians.

During the British period, the south-west corner tower of the Citadel came to be known as Othello’s Tower in homage to Shakespeare’s tragic hero, a 16th century Venetian captain and Moor, stationery “somewhere in Cyprus”. The entrance is adjacent to the tower.

Encased within the distinctly Venetian looking exterior is the original medieval fortress. This is the oldest surviving Lusignan building in Famagusta. Its main features include a rectangular plan with a large, central court and, on the north side, a series of five high vaulted chambers that make up the Great Hall. In an adjacent chamber to the southeast, note the low arched passage a the back that leads into the depths of the northeast sea-side bastion.

Climb to the upper levels of the embattlements for fine views of the city and harbour. From the northeast tower you can catch a glimpse of the modern port below and the ventilation shafts - designed to carry away smoke from cannon and artillery - that drop down to medieval passages.

It is rumoured that the Venetians filled many of the Citadel’s ventilation shafts with earth and rubble to prevent cannon balls from penetrating them. Legends persist to this day that these buried chambers may contain hidden treasure. Left behind by the Venetians when they surrendered to the Ottomans. 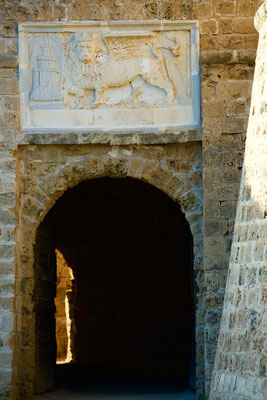 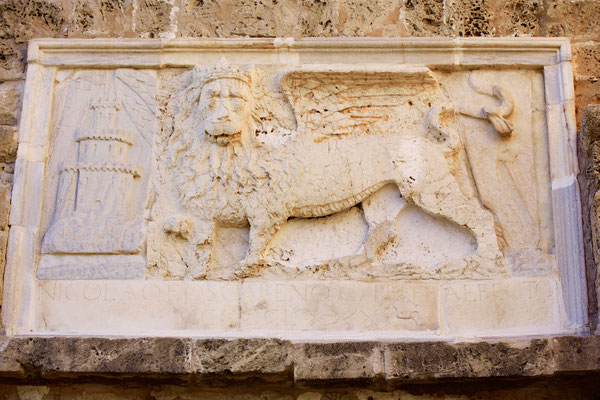 On your visit be sure to note the marble plaque above the entrance gate to the Citadel. It shows in carved relief the winged lion of St. Mark - symbol of the Venetian Republic - standing adjacent to one ofthe original Lusignan towers that protected the town prior to the Venetian fortificaitons. It commemorates 1492, the year the Citadel was enlarged and remodeled and namesl the then prefect of Famagusta, Nicola Foscarini.

(There is a small fee for admission).