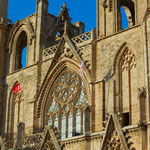 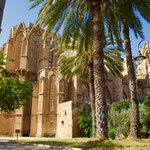 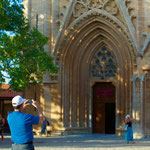 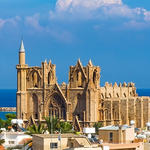 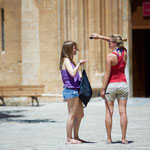 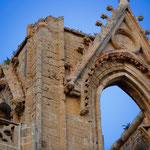 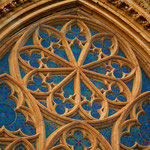 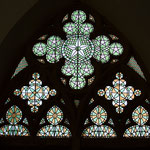 Famagusta's former Latin Cathedral of St. Nicholas is widely agreed to be one of the most splendid and beautiful of the Frankish buildings that survives in the Near East.  It was between the years of 1291 and 1373, and after having first been crowned as kings of Cyprus in the Capital, where the coronation of the Lusignan rulers as kings of Jerusalem took place.  It was here that the island's last monarch, Queen Caterina Cornaro, yielded to the monopolizing powers of the Venetian Republic and abdicated peacefully in 1489.

The cathedral's construction began around 1300, on the site of its predecessor of the same name.  Of the remaining Gothic-style churches in Famagusta, it is the one most closely related to the most innovative and interesting architectural developments that were at that time taking place in the West.

Although heavily bombarded by Ottoman cannons on the exterior, the building nevertheless retains much of its original style and elegance, as is exemplified by its west facade.  Three elaborately carved portals with tracery filled, openwork gables face the town's main square and former royal palace.  To the left of the facade is a small Ottoman tomb dating to 1700 and a small shrine.  The old Venetain loggia, which faces the ancient fig tree, is now used by the faithful for ritual ablutions.  The century old fig tree (ficus sycomorus) is thought to have been planted when the cathedral was built in the early 14th century.

When the building was converted to a mosque, it received the dedication to Lala Mustafa Pasa which is how it is known today.

Visitor info: Visitors are allowed inside the mosque between times of prayer.  There is a small charge for foreign visitors and you must remove your shoes at the door.