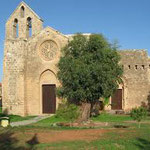 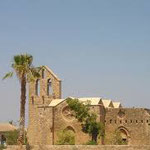 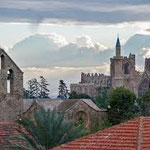 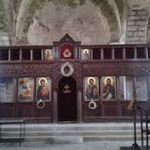 A short detour off the main road and across the small parking lot to the right, leads to the so-called Nestorian Church.  The identification of this building as such is based solely on medieval sources which testify to the extraordinary wealth of the Nestorian merchant community of Famagusta.  Syriac inscriptions associated with the church’s remaining wall paintings would appear to support this.  However, no surviving document directly identifies the edifice as belonging specifically to the Nestorian community.

The church was built in the mid 14th century and greatly enlarged not long after by the addition of two side aisles and passes to the north and south.  Note on the northwest side the rather European looking belfry arcade.  Although structurally enhanced in the 1930s, the church has remained intact throughout the centuries.

The building appears to have been little used throughout the Ottoman period which may partly account for its present fine condition. During the British period, the church was given over to the Orthodox community and re-dedicated to St. George the Exiler (Agios Giorgios Exorinos).  The celebration of the liturgy was held once a year as was permitted.  However, on all other days the medieval building served as a camel barn.  Today, it is used as a cultural center.